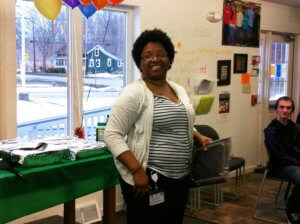 Briana Echols remembers The CanTeen as an eclectic space where it was easy to fit in.

“I liked that it was a mixture of people – people that you really wouldn’t think would hang out together, but here they were playing pool or games together,” she says. “I felt like I was part of a community.

Briana found herself at The CanTeen two or three days a week during some very formative years. Well over a decade later, she’s still around as a mentor and Friends of the Canteen Board Member.

“I spent a majority of my childhood there,” she says. “I mainly just hung out at first and then I got into doing more volunteer work.”

It sparked her interest in working with kids that she’s turned into a career in the Syracuse City School District.

“I’ve always liked working with kids, but volunteering with teens my own age and doing activities in the community increased my need to work with kids even more,” Briana says. “I feel like a better person when I’m helping other people.”

The CanTeen celebrated 20 years in 2019, most of which Briana’s been around for. She considers founder Toni’Lyn Brauchle a key influence and now close friend.

“She helped me be more of an adult, she helped me make tough decisions,” Briana says. “No matter what I’m going through I can show up, even as an adult. I know that someone will be there to talk to.”

She’s more than happy to give back as an adult as well.